Yup, here I still am, after a long absence. I have lots of stories in me, bursting to come out, but before all that, this is currently in my etsy shop. Hope all is well in your world! 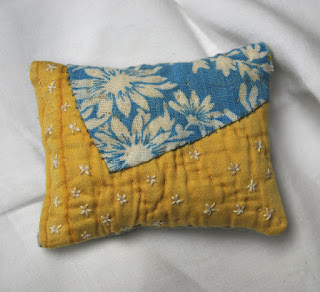 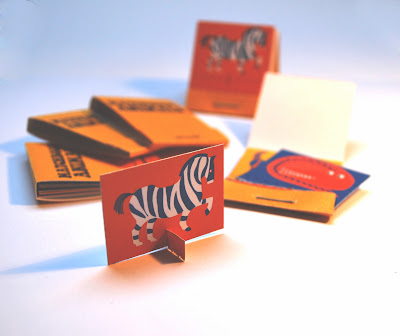 This weekend I finished these. Drawn using Adobe Illustrator, they are based on a variety of vintage styles, including some I found on 60s matchboxes. The leaves can be torn off, using the perforations, and then a strip should be cut off and slotted into the bottom of each picture, to allow it to stand up. They are the size of a matchbook. Illutrator is a brilliant piece of software and I really enjoyed making these!

Back in the jug again

School started again last Monday. I was dreading the swift transition from freedom and autonomy to the serfdom of employment, and it reminded me of Geoffrey Willans' wry comments on the return to school. The teachers and support staff came in for two days of time-wasting pep talks, the uplifting effects of which which were nullified by the news that our lunch duties, which I have hitherto used to supplement my lowly pay, are now to be unpaid - no, wait, we are to get a 'free' lunch in return. Shocked by this news, I blocked out the drone of the speakers, whose statistics on GCSE results sent the ICT teacher to sleep.

On Wednesday the shiny, squeaky 7s came in. They're taller than average this year. In fact, had the 11s of last year still been with us, they would have had a nasty realisation that their bully-boy behaviour was going to cut no ice with these lanky kids, up whose noses they would have to squint as they demanded their lunch-money/phone/ipod. (Not that that happens at my school, I hasten to add… since the expulsion of Fat-Fabio-who-had-unfeasibly-small-feet, we have had no student-on-student muggings).

The 7s dropped things all round school. 'Miss, I've dropped my pencil.' 'So you have! Pick it up then.' They got confused and lost. 'Everything okay?' I asked of at least five separate kids, whose sweaty brows and panicky faces gave them away. They twitched and fiddled in the effort of concentrating on the two days of talks, from the head, the deputy heads, the head of year, form tutors and eventually teachers.

I relish these early days. The headmaster reminds them that they have the opportunity to leave behind their old persona. Their primary-school self can be ditched in favour of a new, 'good' self. A clean slate, he says. It isn't that easy, of course, as any fule kno. The problems, whether at school or home, are often still present despite the move from little to big school. It takes a while for the dust to settle in a move like this. It's very easy to be kind to them. I don't know what they are really like yet. I have few clues as to which of them is spoilt beyond redemption, which neglected, or charming, confident or lonely. Most of them are sweet, eager to please, to settle in, to be liked, noticed and approved of. I'm hoping the best for all of them. The least likely can turn everything around in the course of the next five to seven years.

I am losing P, and gaining E. Also vision-impaired, there is a sharp contrast between him and my student of last year. But that's for another post.
Posted by Ruth Hope at 07:26 No comments:


Last Friday I went in search of shoes for my wedding…yup, still looking for those 70s corkers. I went to Paris. I've been up to the East End 'vintage' shops, (since when were denim shorts classified as vintage?). I've searched Camden Passage. On my quest I've met some really interesting and kind sellers, including one who was really quite drunk (at 10 on a Wednesday morning), and another who denounced her neighbouring shop-keeper as a fraud and an ignoramus who 'knew nothing about vintage clothes when she arrived, and knows very little more now than when she came'. (Think I might have stumbled into the middle of a war). I've been given lists of names of shops and sites by these kind stall holders, and visited nearly all of them. These shoes are elusive. The nearest I have come are a pair of magnificent creatures on Etsy which are exactly right - but half a size too small, translating from US to UK sizing, and way too much money.

In the early 80s I had a job in Kensington Market, a mecca for all those cool kids who wanted a bit of street style. I lived in Kilburn so I used to cycle there, through Queen's Park and down the Portobello Road, and on to Kensington High Street. There's a market in Portobello Road and early on a Friday the dealers would pick it over for bargains which would be gone by Saturday when the tourists and general public came. I looked forward to my Fridays, getting up really early, or so it seemed at the time, to find interesting relics from the old days when people burned coal on the fire and used outside toilets. I wasn't really after clothes then, but enamel plates, ceramic door knobs and such. I had very little money to spend - my job paid peanuts and I was signing on. My huge bedsit had a dodgy electric meter which the landlord had fixed to the highest rate, so you had to feed the greedy bugger with 50p every couple of hours. The previous tenant, in response to this greed, had himself secretly fixed the meter so that you could slip a piece of card in and stop the wheel from spinning round, so the supply of electricity was constant. I used to put in a few quid's worth of 50ps so that the landlord was none the wiser to this illicit arrangement. So pennies were scarce and I had to really think about what I spent them on. (Looks like I've come full-circle, now I think about it). Portobello Road market was a good way to feed my second-hand need.

I headed down there last Friday looking for Those Shoes. It was incredible to revisit after so many years. So much was the same. Yet there were differences. I got talking to Jane, who had run a stall but now keeps a little shop in the arcade under the railway bridge. She told me that she used to pay £45 a day for her stall, but she found the winters cruel, the early mornings and late nights difficult, the market manager disloyal and the other stall holders untrustworthy (she thinks they sold her stock while she was getting a cuppa, and pocketted the readies). We reminisced about the market in the old days. It still has a very linear layout, with antiques at the top end, fruit, veg and cheap shoes in the middle, junk and vintage clothes under the flyover, and those strange boxes of wire and flood-goods at the end where Portbello Road joins Goldborne Road. But the number of stalls under the flyover has shrunk by about a third, and the number of specialist-fittings dealers has really dwindled (no enamel plates). There are still a number of vintage clothes stalls, and enough house-clearance clothes sellers (dead-old-lady clothes). But at either end the Portobello Road has disappointingly caved in to the 'developments' seen elsewhere all over Britain. Instead of the greasy spoon cafes there are now Starbucks and chi-chi bars open to the street. Cath Kidston (oh God, really?) has taken up residence at one end, and Orla Keily (or some such) at the other. Even the antique stalls were fewer, and many supplementing their stock with 'fake' antiques - those boxes, coat hooks, loo door signs etc which have been made and aged with paint techniques.

I wasn't disappointed. The nature of markets dictates that they must be fluid - stall holders and stock wax and wane. I'm sure it will survive, and clothes which seem so modern now will grace the stalls there tomorrow. I hope Jane's shop is a success, though she is tucked away and somewhat invisible there.

I did not find my shoes. Bugger. But I did have a truly marvellous day out, reclaiming a forgotten, and important, part of the person I am, and resolving to remember it.

Yesterday, in a another attempt to coax The Shoes to reveal themselves to me in a shop, through the ether or by any other means, I had a shoe cull.  I tried not to let the chosen few know in case they ran for cover. It's hard to coax them out from under the bath. The dull ones will make new friends at the dump, and the witty ones will be the life and sole at Traid, or some other charity shop. One crafty pair reminded me of the hours I spend on Ebay looking for 'authentic' vintage, and have renegotiated their way back into their box at the bottom of the wardrobe. They're there now, wiping the perspiration from their anxious insteps, and warning the others to shape up or ship out. Don't worry others, I love you all. 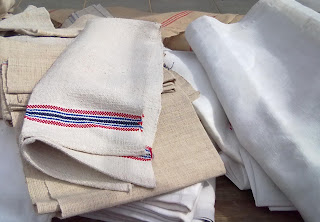 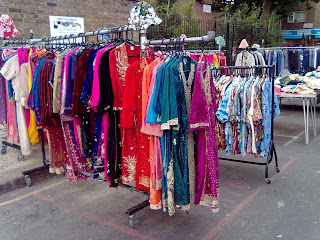 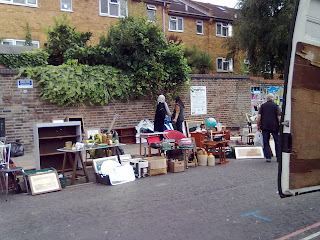 Back to Earth, no bump! 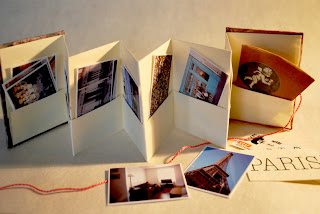 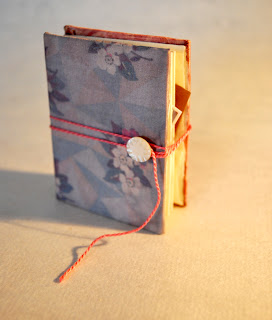 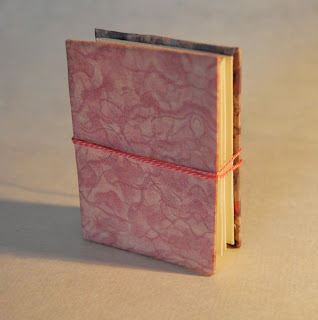 5 days in Paris. We travelled by Eurostar. Beautifully quick, no ear ache for Himself, and very relaxing. We stayed in a flat I found on Airbnb, a brilliant site. Check it out!

My favourite day was the flea market. Ibought a lovely fabric-covered glove box. Also some blue metal buttons, which pleased me.

It was a fabulous holiday with many happy memories. I made a souvenir book for myself and kept some tickets and things inside.
Posted by Ruth Hope at 09:13 2 comments:

book in a matchbox 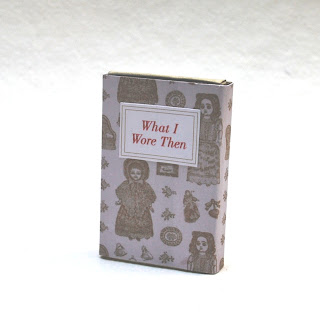 These are some of my favourite clothes. I wear my favourites till they have holes in them. (So does my Dad). Not everyone agrees with my idea of style…but I don't seem to mind!

the outside of the matchbox is printed from a photograph of our hall. My mum papered it with these Victorian dolls. How 70s!
Posted by Ruth Hope at 09:06 No comments:

A long lost blogger has returned for a short spell. In her absence I have imagined all sorts of horrors. She writes about the resurrection of her rather wonderful house, which so far has taken …is it two years? Can it be? as if that were unheard of, even obscene. And at some cost to herself and her partner. I'm not just talking financial, but many other ways. So when she took a break from posting I'm afraid I feared the worst, and thought of the many ways this kind of strain can play out in a person's life.

Her prose is rather beautiful, and the parallels she draws are apt and poetic.Well, I won't go on…you must read it for yourself. I, for one, am relieved that her online presence has resumed, however briefly, and look forward to the next missive.

Meanwhile, my new brooches are in my etsy shop. Do visit and let me know if they are your cup of tea! 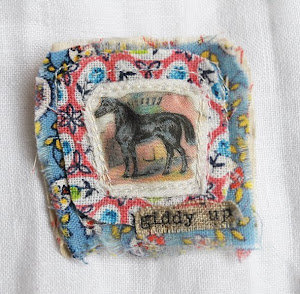